A tale of two lists

Graphs crop up a lot in life. Part of their usefulness comes from their simplicity. At their core, they consist of two lists.

In the language of graphs, we call the things in the first list nodes and the connections between them edges.

Edges, nodes and, the graphs they make up can have different properties. 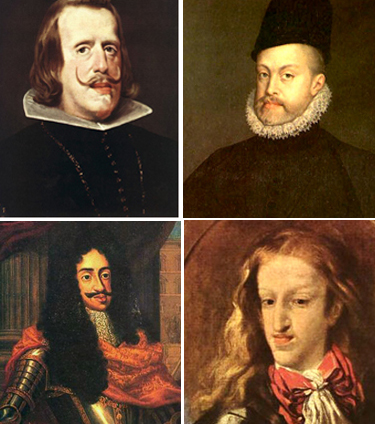 The European Hapsburg dynasty - perhaps it should've been an acyclic graph?

We can see that graphs can have specific properties derived from their constituent nodes and edges. They can be sparse, embedded, cyclic, weighted, directed, or any combination of those things and their obverses!

Now, as intimidating as this might seem, it's good not to let the fancy language get the better of you; more often than not, the type of graph you want will emerge as you work.

It is enough to remember that any graph can be represented by two lists, in mathematical terms:

In terms of Rust, we can say a graph consists of a vector of nodes and a vector of edges.

Let's try and represent this graph:

There are a few ways we could approach this; one involves an adjacency matrix:

See what's happening there? Edges are represented by a 1 at coordinates (NX, NY).

In Rust, our adjacency matrix for this graph could look like this.

One characteristic of this approach is that we're using our nodes' indices to identify and access them. When we iterate over the list at graph[0], we can find, by implication, all the edges between it Node 0 and other nodes. In the case of finding a 1, at index 1 and 3, we know that Node 0 identified by graph[0] has edges connecting it to Node 1 and Node 3. that is, for Node 0 edges 0->1 and 0->3 exist.

Another way of representing this is to treat the edges as our data. To do this, we might define our graph as a list of edges.

We could then derive our nodes from our edge data, for example:

Reviewing the adjacency matrix approach, particularly this last one, we can note that it has some strengths.

This approach is similar to the implementation of a matrix_graph in the petgraph library.

However, the adjacency matrix graph does have a flaw - for sparse graphs with many nodes and relatively few edges, it uses excessive space, O(N*N), this issue is compounded in the case of undirected graphs where nodes can share edges.

At this point, our implementation tends away from an adjacency matrix and relies more on adjacency lists; these are better at representing sparse graphs; they do this by using a linked list to store the edges adjacent to each node. O(N+E)

As we saw in the Index Pointer post, we can represent linked lists as vectors using index pointers.

As you can see, an edge contains a target node index and an optional index for the next outgoing edge. All edges in a particular linked list share the same source, which is implicit. Thus there is a linked list of outgoing edges for each node that begins in the node data for the source and is threaded through each of the edge datas. ** source:** "Modeling graphs in Rust using vector indices"

Let's have a shot at writing an add_node and add_edge method for our struct:

Not too shabby, right now, we can build our example graph like this:

But where our implementation shines is in traversing our graph. Let's write a method that will allow us to do that:

Importantly! ecause we used an index as a pointer to relate our nodes and edges, we didn't have to dive into the tricky territory of smart pointers like Rc!

"This approach plays very well to Rust's strengths. This is because, unlike an Rc pointer, an index alone is not enough to mutate the graph: you must use one of the &mut self methods in the graph. This means that can track the mutability of the graph as a whole in the same way that it tracks the mutability of any other data structure."

The next step will be to finesse our traversal method using an iterator; for example, wouldn't it be nice to do something like this:

Finally, we'll have a shot at implementing a method for detecting cycles!